For the fifth consecutive month and as it has been established for every first Saturday of the month, last Saturday, March 5, the films competing for the month of February were screened at the Monthly International Short Documentary Festival of Kalamata. The screening took place in the two rooms of the Kalamata Creative Documentary Center at 11 Benaki Street, in the historic center of the city.

The audience of Kalamata city is invited to watch and select every month, the films which will be presented in the annual Program, in October 2022, and will be nominated for the audience awards. 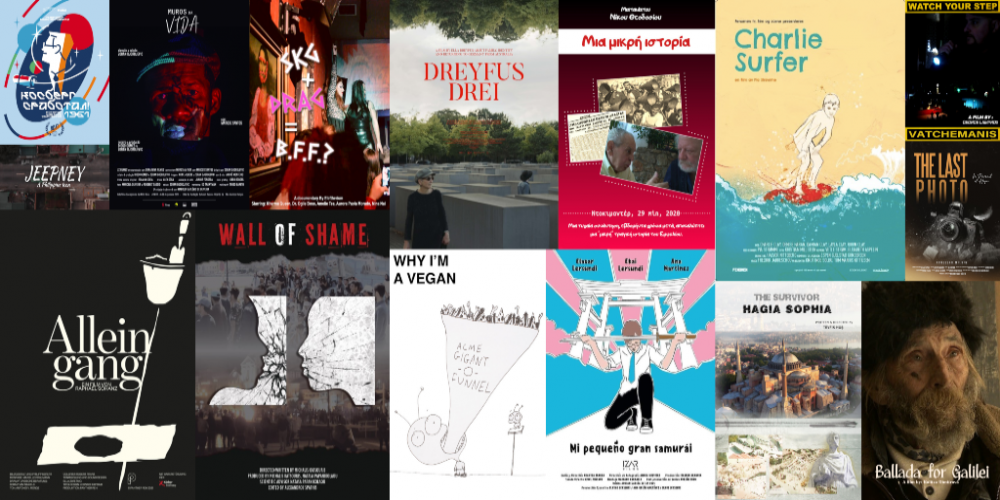 Kalamata's Documentary fans chose the semi-finalist films for the Kalamata ShortDocs The candidate films with a total duration of 8 hours and 50 minutes were presented to the audience in three screenings, in compliance with the rules imposed by the emergency conditions of the pandemic.

The audience voted for the films that will participate in the 1st International Short Documentary Festival of Kalamata, in October 2022 and will be nominated for the two major audience awards, (Greek and International production).

Here are the results: 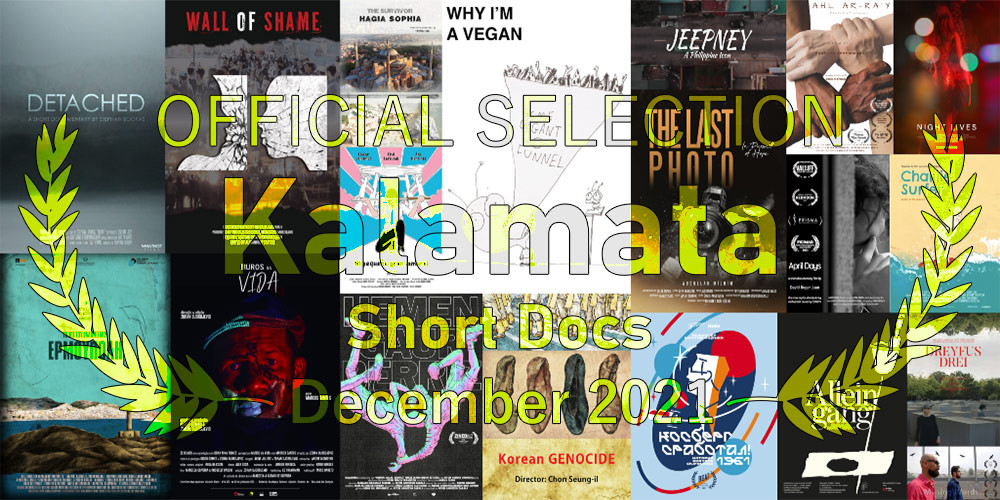 We will begin the new year with two marathon film screenings. On Saturday, January 8 and Monday, January 10 at the Creative Documentary Center of Kalamata, we will screen 24 films competing in the month of December 2021.

We take the pandemic outbreak very seriously and are screening the films simultaneously in two rooms.
Traditionally, the audience votes for the films that will qualify for the annual program of the 1st Kalamata International Short Documentary Festival, in October 2022, and are nominated for the two major audience awards. (Greek and International Documentary).
Read more ... 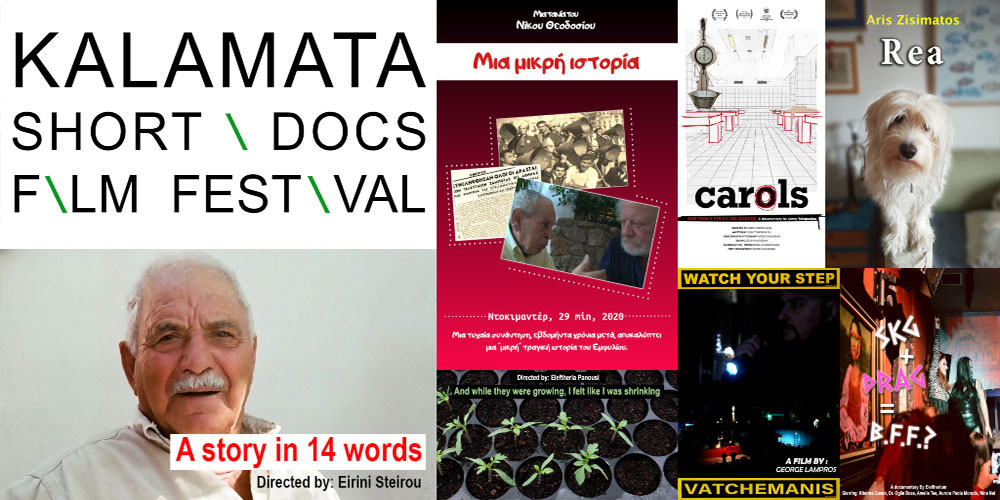 December 21, Short Film Festival on the Shortest Day of the Year

The winter solstice occurs every year in the Northern Hemisphere on 21 or 22 of December, which is the shortest day of the year. That is, the day when the hours of sunlight, between sunrise and sunset, are less than any other day on the calendar.
For this reason, all over the world, the winter solstice is an occasion for the celebration of short films, with screenings in cinemas, events and festivals.
The Shortest Day (Le jour le plus Court) event started in France in 2011 and has since become a worldwide annual tradition.
For this reason, it is called SHORT FILM DAY
Read more ...

Last Saturday 4/12, Kalamata's friends of Documentaries, gathered once again at the well-known place of KCDC ( Kalamata Creative Documentary Center ) to choose together the films that will compete in the 1st Kalamata ShortDocs. The candidate films with a total duration of 3 hours and 18 minutes were shown simultaneously in the two rooms of KCDC (Screening Room and Cafe) in compliance with the rules imposed by the emergency conditions of the pandemic. The Kalamata Monthly International Short Documentary Film Festival, or "Kalamata ShortDocs", continues in a dynamic manner.
After the successful premiere of a month ago, returns with the films selected by the committee, in November.
As was done last month, viewers will be invited to vote for those films that will qualify for the annual program of the 1st Kalamata International Short Documentary Festival in October 2022 and will be nominated for the two major audience awards.
This new process makes the audience of Kalamata active participants in the creation of the new festival while offering at the same time another monthly cultural event in the city.
The screening and voting of the ten films, with a total duration of three hours and eighteen minutes, will take place this Saturday, December 4, at 19:00, in a special screening at the Creative Documentary Center of Kalamata (Mpenaki str. 11).
Greek Productions: 19: 00-21: 00
The Aging Land - 21:13' Greece, Dimitrios Trompoukis, Giorgos Oikonomou
Back to Life - 30' Greece, Alexia Tsouni
Bella Bimba - 30' Greece, George Leontakianakos
The Big Tomato - 18' Greece, Christos Adrianopoulos
The Collector - 4:17' Greece, Evripidis Karydis
International Productions: 21: 15-23: 00
Ashes Wood and Stardust - 20' Germany, Tom Ehrhardt
The Master Brewer - 26:50' Finland, Antti Haase
Dajla: cinema and oblivion - 15' Spain, Arturo Dueñas
POSTPONED - 23:18' Lebanon, Ali Chakaroun
Portuguese Sea - 9' Portugal, Edgar Pêra

The audience voted for the winners of the October event.
These are the four finalists from the thirteen films screened on November 13th. The Kalamata International Short Documentary Festival is a fact!
ON NOVEMBER 13 WE VOTE
The Creative Documentary Center of Kalamata is launching a new event for our city, A condemnation of the festival with short documentaries of young Greeks and foreign creators, born from the successful recipe of the Peloponnisos  International Documentary Festival.
The Festival will have an international competitive character, will last 4-5 days and will be held every October in the city of Kalamata, including, in addition to screenings, workshops, seminars and special educational programs.

After nine successfully celebrated years of the Peloponnese International Documentary Festival, it is now time to give short documentaries their own space.
The 1 st Kalamata International Short Documentary Festival will be held from January 27 to January 30, 2023, and will feature workshops, seminars, and special educational programs. In keeping with the long tradition of the Kalamata Creative Documentary Center, the Peloponnese International Documentary Festival, and the interest of Kalamata's residents in documentaries, the festival will continue to grow.
In October 2021, Kalamata's International Short Documentary Festival launched an innovative selection method.
In every month's free public screening, it gathers and screens the films submitted and selected in the first phase by the committee. Top-rated films advance to the annual festival program based on audience ratings. Currently, the Kalamata Creative Documentary Center has hosted twenty successful screenings, proving the city's viewer's love for documentaries and the need for more cultural activities.
First-phase films are selected by a committee that includes directors, producers, and festival team members, as well as students from Greek film schools.
This festival aims to introduce the Greek public to all the expressions of the documentary genre. In addition, the continuous participation of the viewers in the evaluation process is intended to encourage a deeper study of the way in which the creators communicate and express themselves.
There are no clear boundaries between the subject matter and the artistic approach of the films chosen for this festival. Starting from the experimental and moving towards the "video-art", they end up in the classic narrative,  investigative, and ethnological documentary. The themes of environment, equality, gender discrimination, history, politics, society, and the arts all bind together to broaden the viewer's perspective.
Throughout the Festival, young creators are given the opportunity to present their work and distinguish themselves through three special awards. Thirty (30) films by newcomer directors will be screened in January 2023, many of which are university student productions or films made by underage students.
Bringing young audiences in contact with the documentary genre is a top priority for the festival, providing them with the impetus to engage actively and creatively in their own productions.
It, therefore, presents a program aimed at school students, as well as a workshop on creating documentaries by students. School teachers will also be able to participate in a seminar during the festival, aimed at creating documentaries and capturing oral history in schools.
The Creative Documentary Center and Peloponnese International Documentary Festival continue to conduct workshops and activities in schools throughout the year.

continue to conduct workshops and activities in schools throughout the year.

A large number of Greek and Cypriot creators participate in the festival.

With forty (40) films, Greek and Cypriot creators can effectively communicate with the public and with the international participants, creators, and guests, presenting their work, exchanging opinions and creating an environment for networking and creative collaboration.

The festival's entire program, workshops and seminars are free to the public.

Additionally, all films of the festival as well as the special program for schools will be accessible throughout the year through the festival website from distant areas within Greece.

Subtitles in Greek and English are provided for the films, as well as Subtitles for the Deaf or Hard-of-Hearing (SDH).

This festival is organized by Kalamata Creative Documentary Center, with volunteers from all over Greece participating and supporting it.

If you are a filmmaker you can submit your short documentary, up to 30 minutes, throughout the year.
The entry process is conducted through the FilmFreeway platform. All interested creators are suggested to keep submitting their works for the upcoming festival.