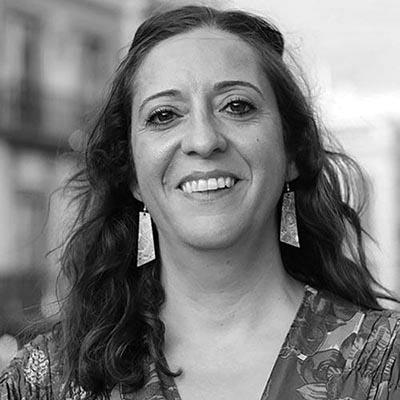 Then, she combined her theatre plays, film and television performances with the direction of different theatre companies (3Antié, La Pecera and Mujereando). Her plays are characterized by the social protest and they have a careful aesthetic analysis. These plays ‘Hamburguesa de Conejo’, ’Quién te vio y no te Recuerda’, ‘Aquí no hay quién nade’, ‘Sueños S.A’, ’¿Por qué?’, ‘Invisible’, ‘El Quejío de una Diosa’ and ‘Etiquetas’, have appeared as a collective creation for last 12 years.

On the big screen, she performed the role of Gloria in the film ‘No te supe perder’ and she had the leading role in short films like ‘No quiero’, ’Mentira’, ‘La Perdida’, ‘La Próxima Parada’ and ‘Espich’. Thanks to these interpretations she won 4 times the award for the best actress. She also worked as an acting coach and assistant director in ‘No te Supe Perder’, ‘Papá’ and ‘Pura, hasta la Sepoltura’ (Award RNE 2016).

Currently she lives in Seville and manages the theatre company ‘Mujereando’ which has got homeless women as actresses.

Her debut as a director is ‘Mujereando. The lament of a goddess”.